When I was much younger, I always thought your mother was someone who strictly gave birth to you, and that’s it. I believed that no one else who could be your mother; the idea of a mother figure was nonexistent. I am blessed to have my birth mother in my life, and she’s still here to this day. We don’t always see eye to eye on certain things, and we do argue, but she’s always done what she felt was best for me and my little brother. She put us first before her own needs and she fought for us when she felt we were wronged. My mother has always done her best to provide for us and even when life threw us curveballs, she adapted and didn’t let anyone push her or us around. She’s quite a strong woman. Tiny, but strong. And she’s the best.

As I wrote, I am lucky to still have my mother in my life. As a kid, I never imagined my life without her. I never once considered what it would be like to look up to another woman as a mother. That concept just didn’t exist for me. It wasn’t until I played FFVI, that I realized a familial bond could exist between a child and a woman who is not his/her biological mother. I love FFVI for many reasons, mostly because all the characters were captivating, the villain actually succeeded in destroying the world, and the female characters were pretty badass. Terra Branford remains one of my favorite video game characters of all time. Terra is the first playable character in FFVI, and her story begins with her feeling lost, used and fearful of the world around her. Her memory was wiped, and she had to learn to trust people again. She began as a shell of a person but blossomed beautiful by the end of the game. Throughout the story, she begins to find herself, finds her purpose in life. It isn’t until she becomes a guardian for several orphaned children that she comes to terms with who she is and what she wants to fight for. 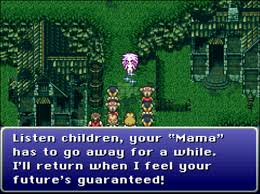 It was one of the most touching scenes I experienced in a video game. And it made me realize that there are many women out there who look after the people in their lives whether blood related or not. Who knew that I could learn such an important lesson from a video game? So to all the women out there who are actual mothers, mother figures, or play a similar mother hen role, I wish you a happy mother’s day. May you feel that you are always cherished, treasured, and loved by those you look after every day of your life. Thank you for your love, for your strength, for your wisdom and your patience.

Never forget that you make the world a better place.

This is "And Now Just Listen" featuring Avery, Nick, Justin and Lewes. We talk about games, tech, movies, and get sidetracked a lot. Interested in contributing? Email inquiries to andnowjustlisten@gmail.com.

Gaming and geek culture website - by women, for women

A light look at heavy shit

The Official Base of Operations for the MECC Initiative.